Classiest dressed cheese I ever saw

Colston Bassett’s Shropshire Blue is not from Shropshire, and it’s predominantly crayon orange, but otherwise  the name fits like a glove. It arrived at my home wrapped in someone’s marriage certificate.

It makes sense that Stilton producer Colston Bassett – which celebrated a hundred cheese making years in 2013 – should make Shropshire Blue. The recipe is identical to Stilton, bar two elements: the use of a different enzyme during cheese-making, and the addition of annatto to create the orange perma-tan effect.

The addition of annatto (from the seeds of the Annatto Tree) is a long held practice that originated as a swiz. Historically, yellowish, carotene-rich cow’s milk was meant to be an indicator of higher quality, so cheesemakers looking for a shortcut drafted in annatto as a dye. Make no mistake, however: this is no chump cheese: Colston Bassett’s version scored a Gold Award at 2013’s World Cheese Awards. Annatto has become part of the recipe, and is favoured by the industry as it also helps soften the cheese without tasting of much.

Shropshire Blue is reminiscent in taste of a toned down Stilton: blue tang with an appealing bitterness that gives way to a caramel sweetness. It’s very creamy, which may have to do with Colston Bassett’s decision to still hand ladle their curds (not a euphemism).

However, one thing it isn’t is a handsome cheese. But cheese is for eating, not dating. And this is, as they like to say, an “eater”. The way it keeps crumbling, forcing you to yet again have to tidy, tidy, tidy onto yet another cracker. Marvellous. I’ve also heard it’s a winner in lasagna, and the World Cheese Book sagely recommends crumbling it into salads or soups, or necking it with some port or brown ale on hand. 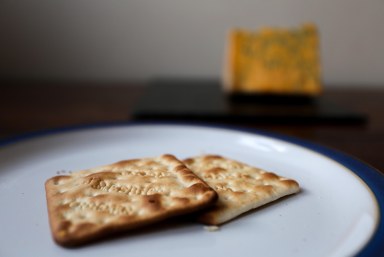 The lovers were contented, unaware of the beast that lurked and envied and would soon destroy their bliss forever…

And they all lived happily ever after.