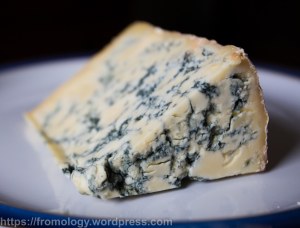 In November of last year, Bath Blue cheese was named champion at the World Cheese Awards (held within the BBC Good Food Show at Olympia, London).

How is such a mighty honour bestowed? Wheels within wheels.

To achieve its crown, Bath Blue had to beat over 2,700 other international contenders. The process is one of elimination: first a longlist is arrived at (these are usually referred to as Gold-winning cheeses (silver, bronze and “no award” designations are also applied)). The worthy Gold are then whittled down to an illustrious Super Gold shortlist (at the BBC event there were 50 of these blinged-out top notch cheeses).

Up to this point, 250 judges & cheese-perts have been sniffing, tasting and calling the shots. They wear white lab coats appropriate for the clinical ambiance dominating the great open rooms where these things take place, more airport hall than hearty deli. However, once the Super Golds have been lined up for inspection, cometh the supreme jury comprised (according to The Telegraph and in the case of the WCA) of “12 experts from the four corners of the globe”.

The magnificent 12 then, without X-Factor style showboating (could be interesting though), choose the king of

kings. Beneath the champ, but above all the rest, are other major winners with attractive titles such as Best French Cheese (Matured Basque Heart, 2014); World’s Best Unpasteurised Cheese (Bayley Hazen Blue, 2014); and Exceptional Contribution to Cheese (Roland Barthelemy, 2014).

As for Bath Blue, made by The Bath Soft Cheese Co, well it’s a lovely organic blue. An eater. Very creamy, with a mild blue flavour running through its green veins (and with less metallic tang than Shropshire Blue of which it reminded me). A worthy winner.

Week after next: Cheese.